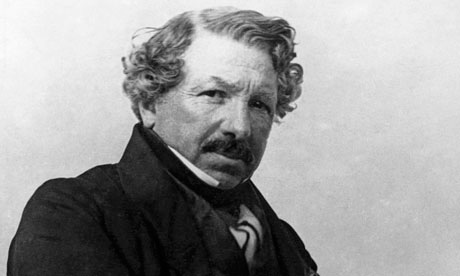 He began his career working in the department of government fees, and then he became artist and scene-designer in a theatre. He helped Pier Prevos in creating panorama pictures, and in 1822 he created the first diorama in a special pavilion in Paris. The inventor built the same diorama in London as well.


Daguerre was making experiments for a long time, aspiring to lighten reproducing of images in his diorama, and together with Joseph Nicephore Niepce (1765-1833), who was working since 1814 in this sphere, he developed the procedure of obtaining a non-disappearing image with the help of light.

In 1833 Niepce died, and Daguerre suspended the development, started together, for some time, but in 1839 he announced about the invention of a new process, which he named daguerrotypy.

The image was obtained by means of exposition of a plate, coated with a layer of silver iodide, in the sunlight, and then it was fixed with mercury fumes and natrium hyposulfite.