10 ways for setting lighting in a portrait shooting 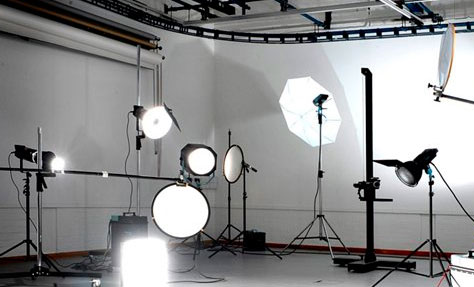 In a portrait shooting, it is important first of all to depict the individuality of the person being photographed. In making a portrait, the photographer should try to transmit his original and unique features, depict his character, and emotions and thoughts. To achieve this aim, various techniques and methods are used – changing the distance of the shooting, degree of definition, background, and lighting. Correct lighting is key in making a quality portrait.


1. Standard frontal lighting from the camera. Used only in photographing documents. No artistic qualities.

2. Use of one lighter with screen. The lamp is located in front of the model and a little to the side, and a screen is set on the other side. This is one of the simplest lighting methods. Despite its simplicity, or maybe because of it, this method makes it possible to achieve excellent results.

3. The light source is located on both sides of the model. At an angle. Using such a setting of variously-located light sources, the portrait acquires more volume and expressiveness.

4. Use of four lighters. One lighter is set at the level of the camera, a second is set higher at around three meters to a sharp angle to the model. One lighter emitting a narrow ray of light, is set for lighting the head of the person being photographed from behind and from the side. A fourth light source from behind illuminates the background. The use of four lighters located on different sides and from different angles makes it possible to achieve a very expressive combination of shadow and light.

5. The lighters are aimed at the ceiling and at the wall, to which a white screen is attached. Lighting of the model takes place only against natural light, which makes it possible to obtain a soft depiction.

6. During photographing in a room with minimum equipment, the use of natural light from a window is optimum. The object being photographed is situated at a certain angle to the side of the window at a distance of 1 to 1.5 meters. The camera is located as close as possible to the window so its axle was perpendicular to the window. It is necessary to illuminate the dark side of the individual using the screen set at a distance of 1 to 1.5 meters from the model. Distance of the screen is determined by lighting – the closer it is, the more even the lighting of the individual is, and lights and shades are softer. The lower part of the window should be closed in order to use only the upper light. If the sunlight brightly illuminates the individual, which is common on a sunny day, the window should be covered with a light white fabric.

7. If there are two windows in the room located at an angle, one of them can be used as a main source of light, and the other window as a secondary source. Illumination of the model’s face can be made based on where he is in the room.

8. Outdoors, it is best to avoid photographing under a bright sun, which can create deep sharp shadows that become almost black in the photograph. Therefore, the sun should be somewhat covered by clouds, so that the shadows are not as sharp. If it is impossible to avoiding a shoot in direct sunlight, it should be remembered that due to the difference in lighting, the part of the face in the shadow will appear almost black. To avoid this, a flash can be used, which will make it possible to even out the lighting.

9. To even out lighting in a portrait shoot outdoors, sometimes are used a screen, which may be a piece of paper, or a white sheet. The screen should be set up facing the shadow direction or lower than the face of the individual. Another way to use a screen is to have it face open space, in such case, photographing takes places in its shadow. Improvised screens may be trees and structures in whose shadows a shooting can be made.

10. In shooting a group portrait, all of the above-mentioned methods can be used. It should only be taken into account that the entire group should be equally illuminated so as not to have any light “holes” and to show all faces and details of clothing.